When confronted with a 80cm high human built wall stretching for over 75m on top of a massive rock wall similar to that of a water reservoir that looks like it was built by bulldozers one's mind jumps to all sorts of conclusions. The small wall looked like a fish trap but is 2m above present sea level. How was the big wall formed by the sea and when and then who built the small wall and when? Is it a fish trap, a ceremonial wall, a protection against invaders or something built by some very energetic and bored people? Well we are still trying to work it out. There are Aboriginal ceremonial rock walls of very different configurations nearby in the Kimberley.

Perched just off the Kimberley Coast adjacent to the mouth of Walcott Inlet is Rankin Island. To casual observers it is just another spectacular geological phenomenon like the rest of this incredible coast. In 2003 an expedition on board Coral Princess went ashore to check out three amazing pools, each of about one acre when seen from the air. Once ashore we found the pools were dry and on the enclosing walls another manmade wall with a curved 'hook' at the end. Also a small cave with evidence of human occupation, several small mined areas and dozens of smaller "pools" in the rock walls each about 1.5m across. Sadly, we were not equipped to fully analyse our discovery and had to leave on the next tide.

Several weeks later we were able to revisit Rankin and this time we had GPS units for mapping, more plans for photography and some fine metal probes for the cave floor sediment depths. All the initial mapping, probing and photography was completed. An amazing discovery for us was that in each of the 1.5m diameter pool-like structures was evidence of tool manufacture including tool blanks and flakes.

From this visit a preliminary report was written and sent to the WA Museum and University of New England (UNE). The following year Dr Moya Smith from the WA Museum (WAM) had arranged permission for us to collect from the site on condition of minimal or no disturbance. Prior to the trip we had also had discussions with Prof Peter Flood from UNE about the massive wall structures or beach ridges found on the island. The walls had been formed from the eroded materials washed off the headlands between the walls. In addition Peter was interested in the beachrock we had seen and its likely age.

We were able to collect several old coral skeletons from the wall for dating purposes and these were labelled and packed carefully. On board the ship we were excited by what we had found and what the possible explanations were. Back at the lab we packed up the specimens and sent them off for dating, wrote up the report for the WA Museum and UNE and waited.

The dates came back and - they were exciting because at 4565 years before present this fitted with the high sea stand then of about 2m above present allowing the wall to have been a fish trap. But we have no proof, and the corals could have been picked up off the beach a few years ago and built into the wall recently. So we developed a set of suggested guidelines for the use of the island for those with permission to go there and possible research targets to try to answer the questions. For me - it's a fish trap! 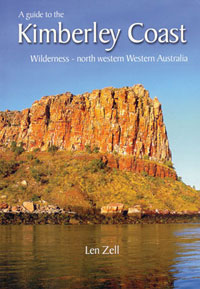 Len Zell has written the Lonely Planet guide to diving the Great Barrier Reef, A Guide to the Kimberley Coast and co-authored the Wild Discovery Guide Shark Bay-Ningaloo Coast and Outback Pathways - WA. He is a respected field guide and his books can be found at good bookshops or online at