River cruising is the perfect means to explore the great Yangtze River.

The Yangtze River is a massive tempestuous monster. For centuries it has been both the life and death of the Chinese people, providing food, water for irrigation and a critical transport route, but turning fierce with immense and destructive floods. In 1998, the last destructive flood, some 2000 people were drowned and millions made homeless. This final malicious act of the Yangtze would be the last.

If China was to grow and prosper, the beast must be tamed and made to work for the masses. The might of the new China is setting out to tame this fearsome beast with concrete, steel and seemingly limitless manpower.

Our journey begins in Chongqing, a vast, sprawling metropolis now bearing the title of world’s largest city. With a population of 32 million it is three times the size of New York City thanks mainly to the relocation of former riverside inhabitants displaced by the Yangtze’s rising.

Our vessel, the 4600 tonne, 150-passenger Princess Victoria is the Victoria Cruise Line’s flagship and quite likely the fanciest cruiser on the river. Most cabins have cute little balconies, there’s a European hotel manager, Christof, and more than sufficient culinary variation and quantity. The attractive young crew are chosen, I’m certain, for their cabaret performing talent as much as their domestic diligence. 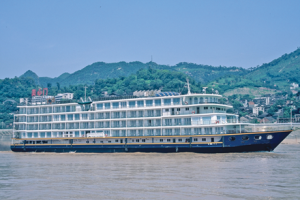 Cruise on the Yangtze in comfort with Victoria Cruises

As HRH proceeds majestically downstream, we pass floating car carriers laden with sparkling new Volkswagens, one of the many products of the newly industrialised city. Both shores are undergoing momentous transformation with great cranes and concrete pourers working overtime to construct new apartment blocks and shopping centres. The ancient riverside villages are gone, replaced by the energetic and progressive new 21st Century China.

We visit some of the few remaining archaeological sites en route and the Ghost City of Fengdu is a standout. Every so often, you visit a place that defies description, and this is one. Visitors are welcomed by a parade of stone demons each depicting unholy vices and terrifying acts. Displays inside the temple include torture and demon gods and are guaranteed to leave you squeamish.

The Three Gorges themselves are so named for the gorges Qutang, Wu and Xiling occupying a section of about 120 kilometres of the river between Fengjie andYichang. Despite their reputation for stunning scenery it was one of the most hazardous stretches of the Yangtze. As river levels rose and fell with the seasons, navigating the fury of its waters was a white-knuckle experience for crew and passengers alike.

We divert from the main channel to the Daning River and proceed up the “Lesser Three Gorges” (Dragon-Gate, Misty and Emerald) where former farmers and river traders are now tour guides for the many passengers who come to see one of the most scenic locations in all of China. The few farms and dwellings we see are slowly being consumed by the rising waters. Residents must dismantle their own homes and move the materials above the water line to avoid flotsam fouling the dam.

Mr Zhang, our boatman, now sports smart leather shoes and trousers but dons a traditional fishing jacket and headdress as he sings a song and poles us up the narrow tributary bordered by dizzying, sheer cliffs. He’s happy that his boat is full of paying travellers, but the notes of his song are tinged with sadness. He’ll never sing this tune like his father and grandfather did, hauling in the nets and selling the fish.

After four days cruising, we meet the manmade monster designed to subdue the Yangtze and in the middle of the night, we toast the new Great Wall as Princess Victoria descends 100 metres via a series of locks to the old riverfront at Sandouping.

Any way you look at it, the Three Gorges Dam is one of the world’s engineering marvels, easily rivalling the Panama Canal or even the original Great Wall itself. Always controversial, the dam was first proposed in 1919 but many events have intervened to delay its arrival.

Proponents argued that flood mitigation would save many thousands of lives and improve irrigation, navigation and water utilisation The hydro-electric plant would produce 22,500MW or the equivalent of ten per cent of China’s industrial requirement.

Opponents cited the dislocation of millions of residents, hundreds of tonnes of damaging sediment, loss of historic relics and the danger of catastrophe due to earthquake or landslide.

“Of course, the new project was welcomed by the younger, ambitious Chinese who did not want to work hard fishing and farming anymore,” says Cathy Huang, our onboard guide with refreshing candour, “but the older people find it very hard. They don’t like living in big apartment buildings and miss their life on the river.”

Begun in 1994 and completed in 2006, the dam comprises 27 million cubic of concrete, all of which had to be laid in one continuous pour. The dam wall is 2335 metres wide, 101 metres high and contains 39.3 cubic kilometres of water.

As the Princess passes through the multi-gated lock system, we fall 100 metres to the river beyond the wall and tie up until morning in anticipation of our ‘great tour’.

After breakfast we gather our cameras and floppy hats and prepare to embark a fleet of buses. One passenger is clearly unimpressed. “Why would I want to go and see another damn dam,” he remarked scathingly. “Yeah,” I sympathised, “a bit like dragging yourself off to the opening of the pyramids.” Regardless of your environmental leanings, viewing the dam has to be up there with the Eiffel Tower, Empire State Building or Colosseum.

Clearly visiting the dam is a popular outing for the Chinese. Hundreds of folk are jostling and nudging, as is the Chinese way, for the few vantage points and I hurriedly snatch a few photos before my arbitrary time limit expires and I’m moved on. In a country with more than a billion people, personal space is a luxury few can afford.

Downstream of the dam, the river is much less effected and the water levels are more-or-less unchanged. Traditional villages reappear and there are glimpses of what life must have been like once upon a time on the other side. While we can lament how the Three Gorges Dam has transformed the Yangtze forever, the enormous upheaval thrust upon those along its course is indicative of a rapidly changing China, a country throwing off the ancient shackles of reluctance and charging headlong towards a prosperous future with the promise of plenty for all. Let’s hope the Eastern wisdom doesn’t repeat the many mistakes of the West. 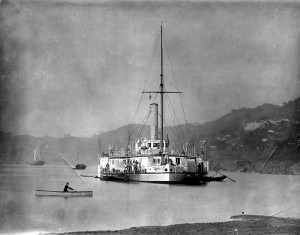 Near the Three Gorges Dam site, in the Xiling Gorge, was the infamous Kongling Shoal, once one of the deadliest sections of the river.
In the low season, a savage rock protruded from the waterway, known to the locals as “Come to Me”. It earned this name as a result of the unusual navigation technique required to avoid striking the rock whilst passing. Instead of trying to circumvent the protrusion, captains must aim directly at the rock so the rapidly flowing current will then direct the vessel around.
In December 1900, the brand new 826-ton German steamer, Sui Hsiang, was attempting to negotiate the Kongling Shoal. The German captain was struggling at the controls when the Chinese officer pleaded with him to aim directly at the rock, but the captain lost his nerve at the last minute and attempted to go around and the current drew the ship against rock, fatally puncturing the hull. All were saved except the captain.

Posted under Adventure,Asia,China,Cruise,River,Small Ship and tagged with culture, nature
Comments (0)